Minitheory is a digital design studio, based in sunny Singapore. We make software simple, based on how people think and behave.

Have you ever wondered why Chinese websites are not as diverse in typographical styles as in most modern English websites? Do you want to find out how to make your next Chinese web project more appealing to users? Read on…

According to a survey conducted by Smashing Magazine, a majority of websites have already adopted non-standard fonts as their primary typeface in 2013, which shows a growing variety and increasing liberty of typographic style on the web. With the advent of Google Web Fonts, Typekit and many other stable and easy to setup webfont providers, worrying about web-safe fonts has slowly faded into the back of web designers’ minds. Well, in the Chinese-speaking world, web designers don’t have that luxury.

The challenges in Chinese web typography

For Mac OSX users, there is also a good choice: Hiragino Sans GB. It is a high quality sans-serif typeface similar to Microsoft Ya Hei on Windows.

The generally preferred practice is to not specify any Chinese font styles in the body paragraph css, and specify charset=“utf-8”. Doing this allows the browsers to choose the best font available to display for optimised legibility.

Designers working on Chinese web projects often wish that they could choose from a wider set of webfonts to fulfil their creative pursuits. This need creates opportunities for Chinese font providers to develop innovative technologies to solve the problem.

While serving Chinese webfonts in a stable and bandwidth-friendly way remains a technical challenge, there are several promising Chinese webfont providers that utilise innovative technologies to make it more practical. Most of these providers adopt a technique which is to use a block of JavaScript to collect all the character needed for the current web page and automatically downloads the minimised font file. In this way only the required font characters are downloaded, which reduces its font file to a reasonable size. JustFont is a Typekit-esque service for Chinese fonts. It has a decent font library for traditional Chinese characters but only a limited set for simplified characters. DYNAFont is a well known Chinese typeface making company that constantly produces high quality Chinese typefaces. All the fonts listed on the site are produced by the company. If you specifically wish to use DYNA fonts on the web, this is the place to go. 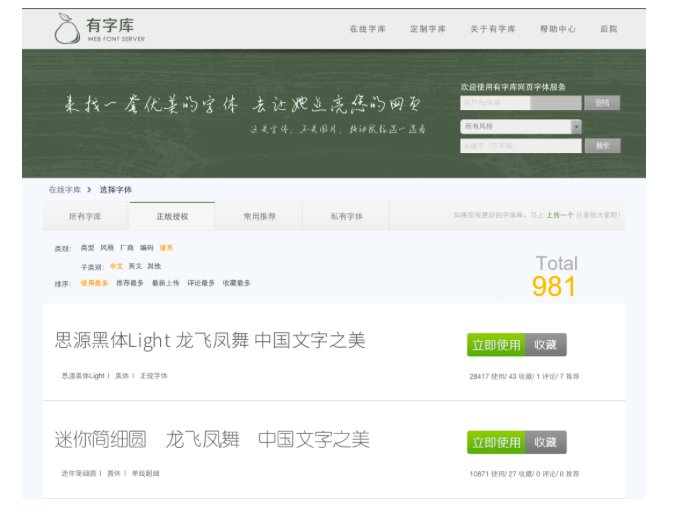 With YouZiKu you can upload your own font file and convert it into a customized webfont file with only selected character set. It also has a wide range of typefaces to choose from. 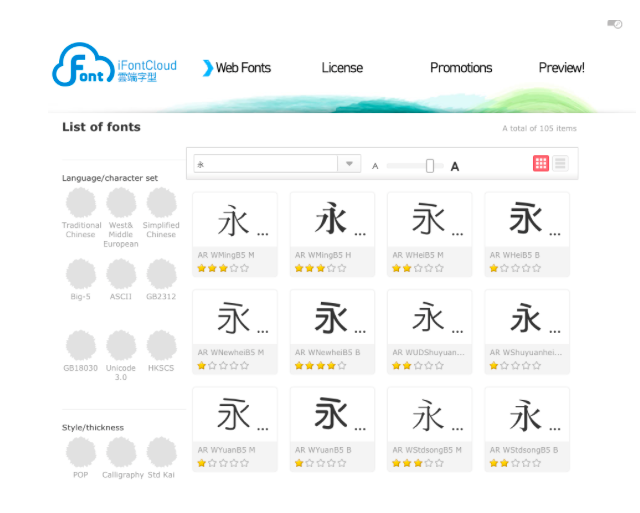 fonts.com also has a collection of Chinese webfonts. However, different from the above services, fonts.com does not have a pre-filter function to reduce the font file size, a normal font file is around 2~4MB. Therefore it is not suitable for websites that target online users with slow internet speed.

Although these technologies allows designers and web developer to choose from a much wider range of typefaces, it is still recommended to use the technique sparsely, which means that it should only be used on short copy text and not on long running body text, as long body text has a much bigger set of distinct characters. The large font file will still substantially affect page loading performance.

P.S. There is a very comprehensive article on Chinese web fonts written by Kendra Schaefer. You can read it here.